A LEGEND IN THE MAKING AND THE TASTING 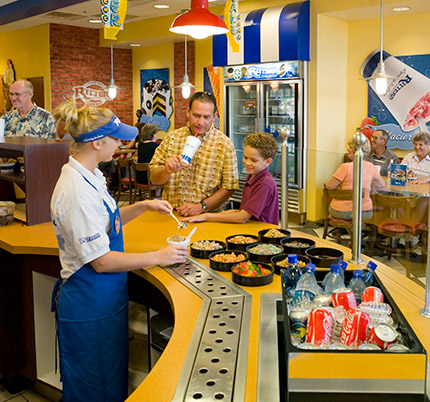 In 1948, John Ritter of Chicago, Illinois, had an after-school job working at a local ice cream shop. One of the best perks of the job was getting to eat ice cream just out of the machine—before it had been packed and frozen solid. The experience of tasting smooth, creamy, fresh-made ice cream made an indelible impression on young John.

Years went by, John joined the Navy and became an aerial photographer, and then started a career in film animation after leaving the service. John met and married Bonny, and together they built a life in Chicago where they raised six children. After 35 years in animation production, John decided to retire.

Upon hearing about John’s impending retirement, one of his sons said to him: “Every time we stopped at an ice cream shoppe you said you’d like to own one someday. This is your chance.”

Remembering his high school experience with fresh ice cream, John decided to open a genuine, old-fashioned ice cream shoppe. One that would serve premium ice cream, made fresh all day long. Of course, John’s high standards required him to create just the right recipe, so he and Bonny began to travel and sample ice cream products throughout the Midwest, the East and beyond.

The more the Ritters learned about ice cream, the more they leaned toward an ultra-premium ice cream called “frozen custard,” developed by the French over 100 years ago. After perfecting their own frozen custard recipe, John and Bonny opened the first Ritter’s Frozen Custard shoppe in Franklin, Indiana, in 1989.

Today, Ritter’s Frozen Custard is headquartered in New York, with shoppes all across the Midwest. You can also find us in other parts of the country, including Florida, Texas and coming soon to New York.

NOT ALL ICE CREAM IS CREATED EQUAL.

One bite and you’ll agree—Ritter’s frozen custard is simply the creamiest, best-tasting ice cream ever to cross your palate. Ritter’s is made fresh all day, every day, using high-quality dairy ingredients. We add just a smidgen of pasteurized egg yolk and don’t fluff up our ice cream with a lot of air (like many other brands) to produce an amazing combination of flavor and texture. In fact, the name “frozen custard” is attributed to a Coney Island ice cream vendor who came up with the new name to better describe the rich, creamy experience. And to the surprise of many taste buds, Ritter’s is only 10% butterfat, which is actually less than most competitors.